Monday Dídac Sensei  invited me to teach the dojo in Barcelona, I decided to accept. I used the opportunity to train the twiching or immediate contraction of both legs to maintain a position that allows any kind of movement or reaction, a concept that we were working on at the Hombu Dojo.

Tuesday evening Dídac Sensei invited me to teach again, this time I decided to review Bassai Sho with the group without the intention of memorizing the kata but to work on the principles that are in it.

Wednesday I can go back to Dublin so I get on the plane and…. back again! the next picture is one of the images that I like the most when I leave Barcelona, Montserrat mountain that is prominently drawn from the air.

Afrter arriving that same afternoon (Wednesday) a couple of trainings with the Sensei Palma allowed me to step into situacion again. On Thursday I had the opportunity to teach the two classes scheduled at the Hombu Dojo, the children’s class and then at night the adult class. Lucky me the group was pretty motivated and willing to sweat, I was clear that my intention in this class was not to teach, given the dimensions of its instructors, but rather to do a training in which we could incorporate some of the concepts that we had been working the last weeks in regular classes.

We started the class with the dumbbells in hand (similar to some of the exercises we do in morning trainings) we condition the arms with kizami, yaku and kizami-yaku. We continue with weights at the ankles performing maegeri. Leaving the dumbbells and weight aside we work in distance for kizami, yaku, and kizami-yaku taking into account in twiching in both legs and the active use of the internal thigh muscles (something in which I am currently working on) always trying to maintain a position that allows mobility and ability to react., A very physical training that I found rewarding also because of the smiles of all when they leave the dojo.

Friday I went to the cinema, which I have not been for years, and I spent a super nice afternoon in the city center.

Saturday I had the opportunity to teach the family class, that is to say a mixed class between adults and children in which you have to get a balance so everyone can enjoy it, this time I decided to do Mae Geri’s work, using the belts as obstacles to force to make a complete contraction both when kicking and at the time of hikiashi. After a few dozen kicks in the air we went to work with the mate as a target, distance.

Sunday morning I went to vote in the popular consultation made by the democratic sectors of Venezuela and in the afternoon to Bray, with a beautiful train ride along the coast and with beautiful views accompanied by a splendid weather. Late at night a group of Venezuelans stood in my way and ended up chatting for hours. 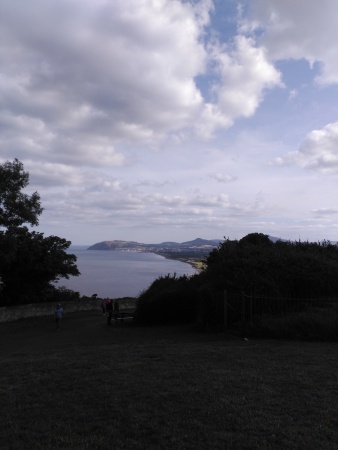 Monday, Sensei Scott class at night consisted of one hour of tube training and then half an hour where we reviewed Kanku-Dai in a private class, corrections such as the initial counter-rotation in kata, as in the Heian Katas, or the circular form of the twisting movements towards jodan shuto uchi, were the most relevant, once finished this half hour and satisfied, I went to rest.

Tuesday in the morning training we work on a concept that I consider quite rellevant, and is the explosive start in the execution of any technique, using a combination of fast movements, slow movements and fast movements, we try to focus on starting and finishing the technique with kimé and between this, to have a space of relax. Wednesday morning training we went deeper into this concept. In the afternoon Sensei Dídac arrived in Dublin, to participate in the photoshoot of the dojo and for the night training  with the Sensei Palma. 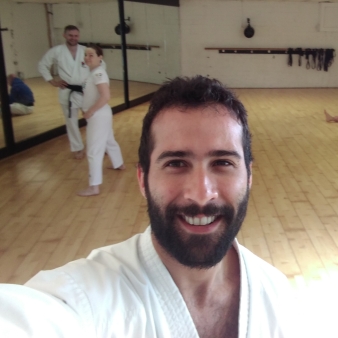 Thursday with Sensei Dídac in the dojo we had a session of morning training with tubes, fantastic, as the attendance to the training was exceptional and there were not enough tubes for all I had to use the mass suit, which basically is a suit full of elastic bands that makes the simple fact of standing up an exhausting experience, at the end of the session we comment on the Unsu kata.

After the morning training, Sensei Dídac and I went for a walk around the city, we returned to the dojo for the kids class and later for the Sensei Scott class. In the last one the aim was to try to generate an uninterrupted flow between a series of techniques, that is to say that the transition between one technique and the other was fluid and continuous.

Being the last class with Sensei Scott, he gave me a certificate as I successfully completed the internship of the HDKI, as the first participant in the program. 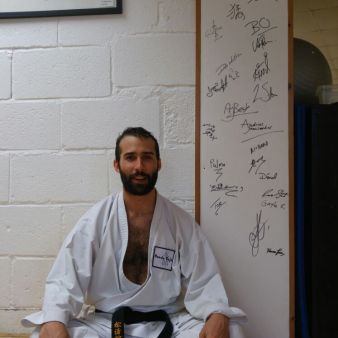 I have to say that this experience has been tremendously rewarding from every point of view, I am infinitely grateful for the generosity expressed by everyone with me, from the instructors who without any kind of stinginess or jealousy gave me their art, to the students of Hombu Dojo who today I consider my friends. Everyone has my respect and my appreciation, infinite thanks!